PRIDE AND ASPIRATIONS FOR THE KYLE ASQUITH FOUNDATION

In 2013, Cockburn student Kyle Asquith waved goodbye to his mother on his way to school and, a day later, he passed away following a fatal brain haemorrhage.

A year after the 15-year-old’s tragic death, students and teachers at Cockburn launched a series of special fund-raising events in his memory, with the aim of raising £5,000 for The Kyle Asquith Foundation, a charity that will support the NHS Blood and Transplant Trust Fund.

“When Kyle died he saved five people’s lives by donating his organs so, if we can help make that happen again, it would be fantastic” said Year 11 student, John Hall, one of Kyle’s best friends who took part in a 13-mile sponsored run. John was one of a group of Year 11 students who set up and ran the event. This was a voluntary fund raising event and the students showed independence, resilience and determination to successfully complete the run. It was fantastic to see so much support at the school gates for the finish line.

If you wish to contribute to The Kyle Asquith Foundation please contact the school at info@cockburnschool.org and title the email ‘Kyle Asquith’.

We also have a JUST GIVING site and you can make donations online at https://www.justgiving.com/kyle-asquith

Students at Cockburn had special assemblies on Thursday 9th March to commemorate 4 years since the death of  Kyle Asquith.

The school welcomed Kyle’s mother and father, Tracy and Alex Asquith as well as his grandparents, all of whom are regular visitors to the school. Tracy said that “Being part of this day at Cockburn is a big help to us on such a difficult day.” 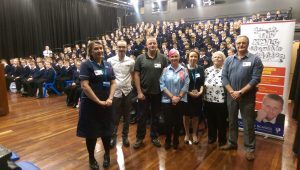 Also, there was Raymond Tait, 39, a resident of Dundee and transplant recipient, who received Kyle’s kidney and pancreas in March 2013 after four years of intensive dialysis treatment. This was his second visit to the school to support the charity and raise awareness of organ donation. Raymond had written a poem which he shared with the students at Cockburn. Raymond was one of five people given hope by Kyle’s parents and their act of kindness.

He said he was proud to come back to Leeds and talk to the students about his life changing transplant, adding: “It goes to show how dramatically a life can change. Within a few weeks of the transplant my life had changed so much. By making more people aware and by more people signing up to donate, Kyle will save many more lives than the 5 he saved with his organs.”

Assistant Headteacher, Chris Sutcliffe, talked to the students about the work of the charity over recent years and urged them to continue the fundraising into the future. She also told students about a recent £500 donation made to south Leeds charity Charlie’s Angels, based in Middleton, that was set up by a parent who lost her child, and who wanted to support other bereaved parents in the community.

Cockburn also welcomed a number of NHS staff who wanted to raise awareness of organ donation. Dr Claire Tordoff, a consultant in the Intensive Care unit at St James Hospital, spoke of looking after the poorliest patients at the hospital and the reality of how some people who do not make it donate their organs to save the lives of others. “These people are our heroes” she said “and Kyle is one of our heroes – we are incredibly proud of him.” 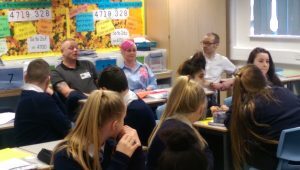 nd what it is like for the medical staff.” Dr Catherine Penrose, Paedictric Intensive Care Consultant at the Leeds General Infirmary spoke to students of how “the families of the young people who have died and have donated their organs have hope and something positive – a legacy moving forward.”

Alex Asquith, who joined the workshops with his family and Raymond Tait, told the students “It is so comforting to know about the people who benefited from Kyle’s organs. Ray has four kids and their dad’s life is thanks to our Kyle.”

Headteacher, David Gurney, said: “Most of our current students weren’t here when Kyle was and as the years go on we want to make sure the Foundation is still going strong so that everyone can take ownership of it. We are very proud of the work that they do to raise funds and keep his memory alive.”

“Most of our current students weren’t here when Kyle was and as the years go on we want to make sure the Foundation is still going strong so that everyone can take ownership of it. We are very proud of the work that they do to raise funds and keep his memory alive.”
David Gurney, Headteacher

Projects have also included: a balloon launch (click here to read more about this); red ‘Asquith United’ ribbons – in honour of the teenager’s obsession with Arsenal; a cross-country run that many students have signed up for; as well as football tournaments, bike rides, bun / card sales and more.

Kyle’s mother, Tracy, who lives in Middleton said: “I don’t think the teachers and students at Cockburn know just how much their support has helped us come to terms with Kyle’s death. It all happened so quickly and came as such a shock. It is still odd not having Kyle around but, although we have lost a son, it feels like we have gained an entire school.”

All of the students and staff were really passionate about the charity because we feel very strongly that it is important to keep Kyle’s memory alive by helping others, just as he did.

In May 2014, a weekend of bag packing at the new ASDA store in Middleton. The store opened on 19th March and the staff generously invited us to fundraise over the weekend of the 24th/25th May. They also featured Kyle’s charity as one of the green token charities. Reflex Print Solutions (Burton on Trent), who print our newsletters, have generously agreed to donate Kyle Asquith Foundation badges and wrist bands that will be sold at future events.

Pictured below are some of the students who volunteered to bag pack. 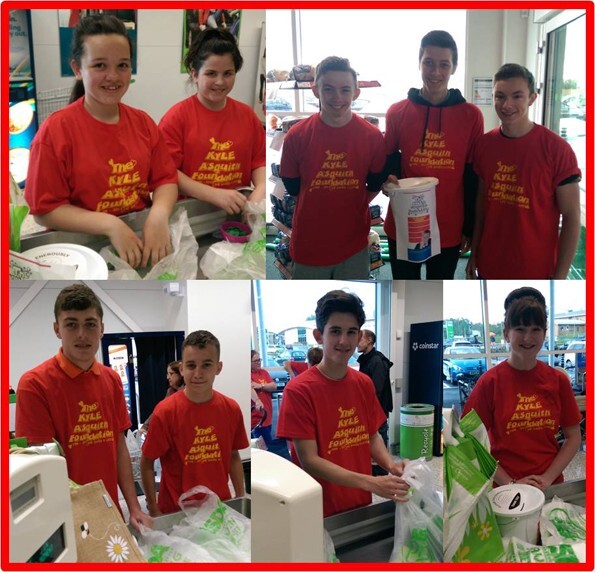